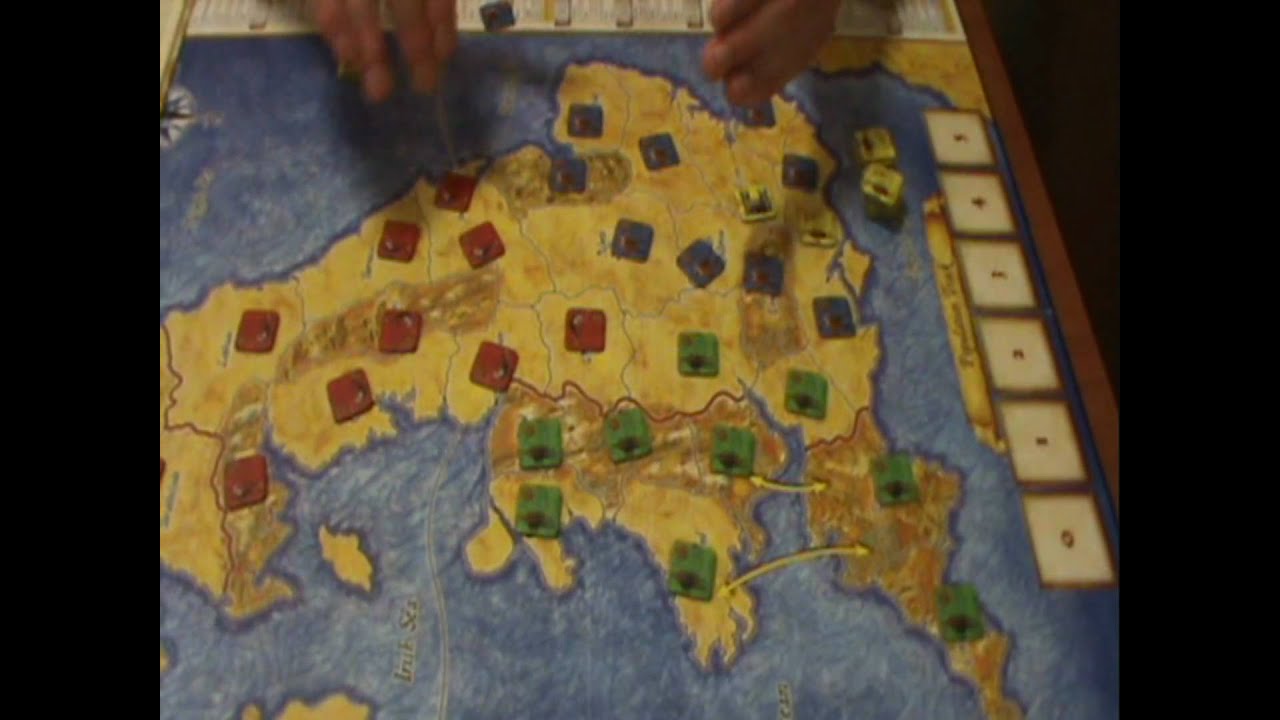 Britannia is a great game - so it’s a shame none of my fiends like it.

Here’s how it works. You have a map of brittain and a timeline. You start at 55BC with the invasion of the Romans and you move through to 1066 when William the Conqueror gets to prove his point or be renamed William the Minor-Historical-Footnote. In between, everyone else gets to invade brittain - in the correct order. Obviously with wave after wave of invasion sweeping over the island, the poor locals who start on the board tend to get wiped out. To balance this, each player plays a “team” of nations, for example, the Blue team comprises the Belgae, the Picts, the Angles and the Normans in the four player game.

Theoretically, each team is selected so that their nations never came into historical conflict to minimise the chances of a player having to attack themselves. In practice games can get way out of whack with history and so you can end up in strife where both the Angles and the Picts really want Dunedin in the same turn. But hey, it usually means both nations are doing okay, so stop your moaning.

Battles are fought by rolling dice, so unlike Vinci, there is the chance of the local wiping out the invaders. Once the invaders have landed, they turn into locals and start breeding. You sometimes get leaders to help for a turn and certain invasions are deemed to be Major Invasions where you get to have two turns in a row to amplify the devestation your invading nation causes. Now that has to be good for you - amplified devestation!

Points are (mostly) scored every 3 turns. And to get those points you have to be in the correct areas. For starting players this can cause a bit of a learning curve as you have to keep track of where you need to be now, plus where everyone else - especially those nasty major invasions - is going to be, up to 3 turns away. In force.

Once you have mastered that, Britannia is a great game. Full of the feeling of being there, minus the pain and dirt and plus potato chips. It plays in about 4 hours. Every game has it’s own challenges as you adapt to the fall of Wales or the possible Pictadonian empire. There are 3 and 5 player variations which play even better than the 4-player game. (This is because the Black team in the four player game have a decidedly defensive bent (the Welsh want to hold Wales, the Caledonians want to hold the highlands, the Jutes want to survive a single turn and the Danes can run into trouble if luck is against them.)

When you play Britannia, you have to be aware of the future. The absolute key to the game is to know who is going to invade, when and where. This is so you can plan your conquests through the ages. For a beginning player this was very hard to pickup. The game is more about this than about playing(or rolling) well in any given turn. This means that you don’t really play each “wave” of people separately but in the context of your “team” of peoples who historically at least had no real relationship between them .

I do have some quibbles. Some nations seem artificially hampered by their target areas. For example, the Jutes want Kent, but so do the Angles and the Saxons on the same turn, and they play after those pathetically very weak Jutes. Often it would seem logical for the Jutes to head around the coast a bit, say for Wessex or even possibly Corwall or Devon for a better “starting area”. Also, some nations have staggeringly small population pools. I personally see no reason why the Caledonians, for example, should be stuck with just 6 people. Extra people could be the start of an expanding Caledonian/Welsh kingdom that could threaten the Red/Blue domination of England.

That said, Britannia rates up there. Although I don’t seem to get to play it much, I always enjoy it greatly when I do.