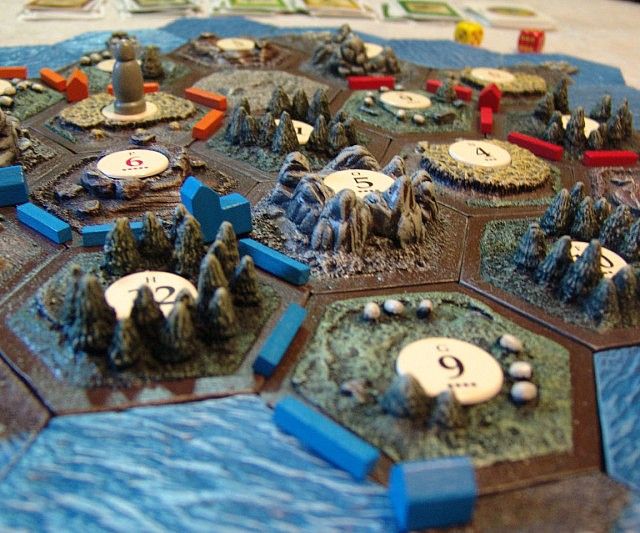 I have played more games of Settlers over several years then I care to remember. I have played mostly with the same group of players. But also with many non-regulars and non-gamers. My main group are all experienced players who know the rules for all expansions so well that we comfortably combine all expansion - we play Settlers + Seafarers + Cities & Knights, 5-6 players, all jumbled together. We play it fast, usually a game will last about 2 hours, and so two games a night is common.

So anyway, that is my background on the game. Now my thoughts (worth less then a penny as they are) on the base game and its expansions, plus a few other things for good measure. Please note, this is not meant to be review, just my thoughts. So a lot of detail will be omitted.

The basic game is good as a light and fast game, I have played it with many people, every one of whom has enjoyed it - as far as I can recall. In fact the only really reserved response I have had was from Gordon, - yes you. But taken as a light game, it is good, my group found it became a bit tired after a lot of regular play though - and I mean lots of regular play. I think it is great as a first intro to “German” style games as it has light rules, plays quickly, has resource management, is non combative, has great player interaction, plenty of room for strategy, luck, all in all a really good mix for the first timers. I would never hesitate to recommend this game to a casual gamer, or newbie, gee, even women enjoy this game - I have played with several - in fact the most outstanding player I know of is a woman, my wife, she is a demon at this game - more on that in a moment.

Sure it makes the game last longer, that is to be expected with more players, but the additional building phase between players turns goes a long way towards keeping everything going strong and everyone involved. Most definitely does not break the game, just adds more people - that’s got to be good, and of course if you are playing with less then 5 players some of the time then having this expansion makes no difference.

Cities & Knights plus its 5-6-player expansion

Cities & Knights did for me what I wanted, and what I think it was meant to do - beside make money - it added life and more table time.

Yes, Cities & Knights adds a fair bit to the game in terms of rules, but nothing the average gamer can’t handle. I will not go into all the changes it makes to the rules, or play, that is not what I am trying to talk about here. But I disagree with comments that it changes the fundamental game, the game is basically the same, you roll the dice, you collect things, you trade and you build. In a nutshell what it does is add something else to collect - commodities, which are collected just like resources, but from cities only - and tons of new stuff to build. The net result of having more stuff to collect and build, plus a couple of other things to think about is that you have more options, and more to think about, so it is a deeper game, a more thoughtful game. It is a longer game too, but as stated above, we play 5-6 players with ALL expansions in a couple of hours, because we know the rules. If you do not know the rules, and are still learning the ins and outs then of course it will take longer to play, but once you know em, it is not much longer, and is fluid and easy.

But Cities and Knights is no longer the light game that was Basic Setters, it is a game for people who like the basic game but want more depth and options, while keeping the fundamentals - you roll the dice, you collect stuff, you trade and you build.

Special Note - The Barbarians and the robber

I am not sure how many people are aware of this, but when playing Settlers with Cities & Knights, it is an official rule - from Kosmos and Teuber I think - that the robber remains inactive until after the Barbarians have made their first landing. We find this a great rule. Note that players are still limited to 7 cards in hand without a city wall, and must discard half as usual on a roll of 7 but the robber is not placed on the board.

Seafarers plus its 5-6-player expansion

Now, I have never played this with just basic settlers, I have always played it in conjunction with Cities & Knights as well. It adds a small amount of new rules as it adds two very important new things, sea routes - like roads but they go over the sea and are built from ships, - and much more variable board set ups. The ships are great and have been a nice addition to the game, they do not really add any more play time, once more just more to think about and more to build - ships. The other thing they add is a variable board set-up; previously all set-ups were just big hexes. But now they can be predesigned boards with several islands of variable size. No harm in that. The preset ones are great and nicely balanced. However, I have an issue with the big random layouts. Namely that they result in lopsided layouts where the first player or two to place his settlement/city in the beginning can obtain a big advantage due to a limited number of statistically prime spots.

So, seafares adds diversity of layout and the means to cross the ocean. I would not consider this expansion if I wanted to add more depth to Settlers, but I would if the idea of a slightly longer game with more variable setups and building shipping lanes sounded like fun.

Just a quick note that I and some of my fellow gamers - those that I have played 3 player with. Think that 3 player Settlers when played with all its expansions - Seafarers and Cities and Knights - is a brilliant three player game. Games easily take under an hour and are great fun this way. Especially in conjunction with some of the three player maps provided with Seafarers.

You roll dice when you play Settlers; there is also an element of luck involved with the drawing of development or progress cards. So you expect an element of luck in Settlers. The issue for me is, how much does it affect a player’s ability to win through strategy. Well, I think luck is very apparent in Settlers, but not in as much of a dominating or controlling way as some people seem to think. I will explain.

Firstly, the real problem area for many in Settlers is the luck of the resource roll. The resource roll is always there, you watch it in anticipation, you curse it, and you cannot deny it. It is most apparent is it not that your game depends on it. Your ability to obtain resources is paramount no matter your strategy. Now, from a pure statistics point of view, playing settlers by the numbers is a good idea, thus my problem with the lopsided layouts that occur in some Seafarers scenarios. However, if we are using a good old-fashioned semi balanced layout, such as the basic hex maps tend to produce, I think this problem is gone. People who play well know how to set up well and the good maps give everybody the ability to do so. The initial starting positions are important in Setters, do em too badly and you can make life very hard for yourself.

Now, having just pointed out the importance of the statistics, they are still only part of the story. Anyone who has played a lot of Settlers has probably had the experience of sitting on great numbers like 6 or 8 but had bugger all of them rolled in the entire game, conversely horror numbers like 2, or 12 get rolled quite a lot. I have seen a player who was new to the game place really badly, many of their settlements were only on two hexes and he relied on less frequent numbers, indeed his best collection number was 11, man, a whole heap of 11s were rolled throughout that game, a heck of a lot more then of 9 which was rolled something like twice in that game. He did not win, but came close - he was beaten by my wife, not unusual.

So I am saying that playing by the statistics is important, but lady luck does not have to follow the rules of probability over the course of a game of Settlers, and indeed often won’t. So what do you do? If the rolls are not going your way you can spend a lot of time twiddling your fingers right (actually we like to build towers out of the roads and things) - well I say wrong. If you are playing well you are not twiddling your fingers (or building towers) waiting for good rolls. If your play style goes along the line of “eventually my numbers will come up, and I’ll get the stuff I really need” then you are playing badly, end of story, don’t expect to win, or even have a lot of fun.

If a good player is holding cards he does not want in the immediate future, for his next building, then he gets rid of them, he trades them, even for things he does not want, he trades them for cards he can trade with others to get what he wants, so he can build sooner rather then later. If he has to trade at 2 for 1 or even, so pity him 3 for 1, then he does it if it gets him closer to getting a card he can use. He does not just sit, and watch, and wait.

A good player will consider building a settlement on a resource he already has in droves, why, because he can use it for trade, that’s why.

A good player will see where others are lacking or struggling, he will look for any opportunity to gain a monopoly on any resource, he will plan his building sites around that, he will understand that the key to Settlers is getting stuff to trade, any stuff is good, because trading is how you win, he can even trade with the bank if he has to, but trade he will, as much as possible.

My main group of players are all smart people; we all know the rules for this game. We have played it a lot together. But my wife rules this game; I have seen her win from horrible positions as much as good. And she does it because she does the above better then anyone else; she is involved in planning and managing big company resources and things for a living. She is just dammed good at working the system. She knows the stats and plays the odds like all of us, we all do that, she is just better at the planning and trading and finding ways to get what she wants outside of waiting for lady luck to bring it her way.