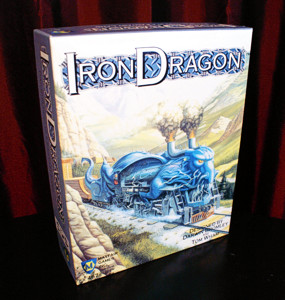 I’m breaking my own rule again and writing a review based on only playing one game. Maybe someone else will write a half decent review after this.

First impressions was not good. The board looked plain and overcomplicated. Ok I’m shallow but I like my bright colours and tokens. Little trains or model cities would have been even better. If Monopoly can have a train then I’m sure Iron Dragon could manage some too Smile

Even worse was getting to learn all the place names and locations. Fortunately the designs have grouped all the cities together alphabetically and there are guides to locate cities and also find out qhat they produce so you quickly find your way around. I understand there are versions of the game with real maps that players will instantly be familiiar with.

The crayons are a novelty but only if you’re not the poor sap who has to clean it all off afterwards Smile They don’t taste that good either.

We had a problem after a few turns in that we all ran low on money and only had 2-3 cities linked and without the right cards there wasn’t much possibility of earning more money. A quick vote around the table and everyone got a Goverment subsidy of 20GP which got the game going again.

After that the game played ok. There was an enjoyable part near the start when you have some tracks built but still have limited funds so have to negotiate to use the other players tracks and get them to complete links for you.

However once you have a reasonable sized track and some funds behind you then it becomes much easier to get around and complete deliveries although it can get a bit boring wasting turns just moving your train from point A to point B.

Another criticism which some will disagree with me here is the process of moving and the building tracks. Its a little slow and some impatient players (me me me) may decide to have their turn while the previous player is still building their track. While this pipeline gameplay may speed up the game it does sort of put each player in their own little world unaware of what else is going on in the game and can lead to confusion over who’s turn it is (I’m sure I missed a turn somewhere in the game and I also think I picked up an extra turn somewhere too).

The fact that you can do this in the game highlights another weakness - lack of player interaction with each other. Aside from the early stages, everybody pretty much played their own game without a thought of the other players. I can however envisage scenarios where you can cut off one player from certain sections of the board by building a zigzagging tracking so they can’t cross it. Block off enough cities (all you need is two)and you can guarantee the other players can’t possible fulfill the victory conditions. In a small player game this can easily be accomplished.

We made a huge goofup in that a certain someone misexplained the victory condition and the players were wandering around trying to accumulate as much wealth as possible without giving any serious thought to connecting 7 out of the 8 cities. The game would have been played very different if we knew what the victory condition was at the start.

I’m still keen however to give the game another try just to see how it does play if we follow the rules properly and employ more agressive strategies.