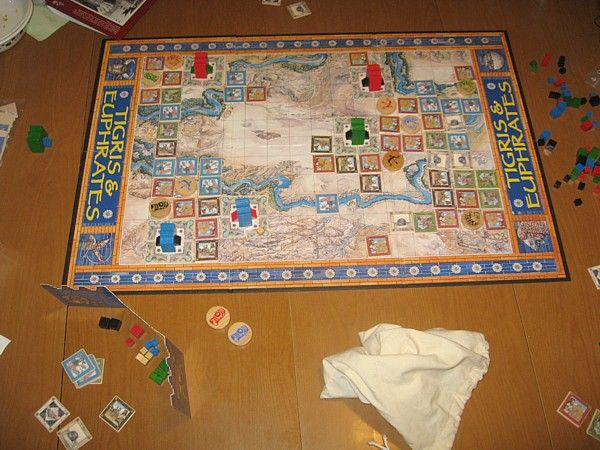 A game of ancient civilisational development in the region between the Tigris and Euphrates rivers. Each player attempts to build balanced kingdoms using elements of the four aspects of civilisation : Politics, Religion, Trade and Agriculture.

As a first time player, I found the rules somewhat complex. Close attention must be paid to overall board configuration to prevent incorrect actions being attempted. We were lucky enough to have a player who knew the bulk of the rules and could correct newbie mistakes and rule violations.

However once the rules are sufficiently understood, the game progresses reasonably quickly. We finished our first ever game in about 2h:15m.

The strategy component of gameply is very high. The only random element is blind selection of game tiles from the pool. No dice are involved.

I particularly enjoyed the aspect of the game which allowed players to usurp the good works of other players. This allowed for a great deal of uncertainty over who would eventually win the game. No-one seemed to be able to streak out to an early (and subsequently unassailable) lead.

Combat rules are simple. When civilisations collide, a single attack and subsequent defence are enjoined with the winner decided by simple resource comparison. An element of risk is introduced by the use of off-board screens which prevent the attacking player from having complete knowledge of the defenders resources.

There is more than one “End-Game-Condition” (EGC) and it is quite easy to miss at least one of them and continue play beyond normal end-game.

Because the goal of the game is to build a civilisation balanced between the four areas (Politics, Religion, Trade and Agriculture) End-Of-Game (EOG) scoring is based on the having the “highest-low” earned victory points across all four areas.

This means that just concentrating on any one area of civiliation is counter productive. All four areas must be promoted to ensure a chance of winning.

Did I enjoy play?

Yes. (Once I got the rules sorted out).

Would I recommend it to others? Yes. (If they were experienced gamers or at least had someone familiar with the rules to play their first game with).I rate “Tigris and Euphrates” as Very Good.