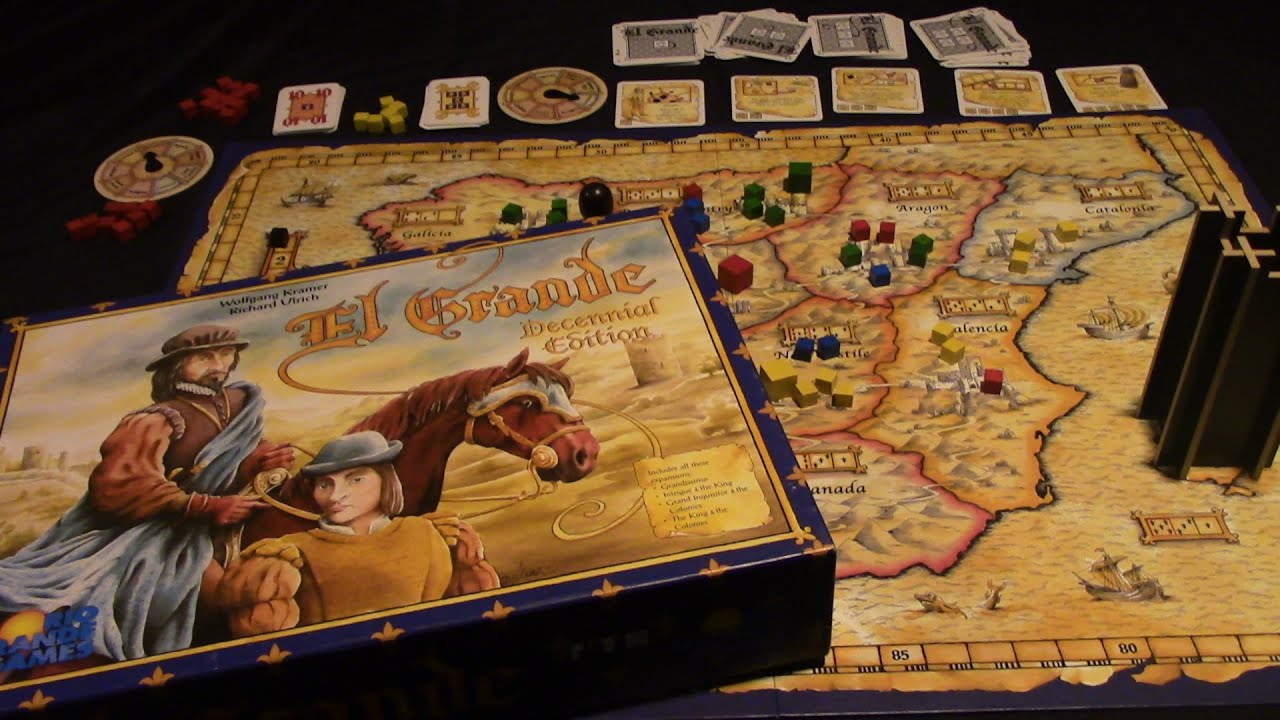 El Grande is probably the best game I own. It plays inside 2 hours. Takes 3 - 5 players. It has a nail-biting feel to it as you try to make the best choices each and every turn. It has fairly simple mechanics. It has a beautiful board.

There are several variations and expansion packs. so I’ll only deal with the basic game here, ignoring the colourful spainsh terms. As a baron in medieval Spain, you are vying to get the most prestige with the King of Spain.

The mechanics are simple. There are 9 rounds and everyone scores at the end of round 3, 6 and 9. Each round you will put between 1 and 5 blocks on the board. You’ll put them into one of the 9 regions of Spain, or into the Castle. You are limited to placing in a region next to the King’s region so there are a limited number of options each turn.

Each region has a unique score associated with it. Say 5 points for most blocks, 4 points for second place and 1 point for third place.

Here’s the other fun part. The cards determine play order for that round. That’s where those weasily “tend to’s” in the previous paragraph come from. Going first you can select an action. That action may not be the “best” one, if a lesser action will suit your specific case better this round. Or if you feel you must stop another player from taking that action.

Hang on… What do these actions do? They muck with the nice ordered game we have so far. They let players score a region between scoring rounds. Or force other players to throw the blocks in their hands back into the gerenal pool. Or move the king…

… Now the king is very important. For whatever region he is in is protected from other people touching it while he is there. So you can use it to stop people from overtaking you one-block lead in a crucial region during a scoring round.

The Castle acts as a wildcard allowing all the block in there to jump into a region just before scoring a round.

That’s the mechanics. Forget the mechanics, they’re simple. Everyone we have introduced to the game has learned them in the first couple of rounds and been really playing by the end of their first game.

There is a downside. I’ve been able to describe the game without the ‘spanish’ colour. The colour is just a tack-on to a very workable block placing game. If you want the feel of medieval Spain and Grandes vying for the favour of the King, this is not the game for you. However, if you want a fantastic gaming experience that you can replay time after time with enthusiasm …

The fact is that there are decisions galore to make and even as you make them you are trying hard to figure out their ramifications. Subtle plans work better than overt power displays. There is no luck, but a lot of complexity from the interaction of between the players. Experienced players will tend to beat novices. The more you can guess other players strategy and play to it, the better, but remember they are doing they same to you.