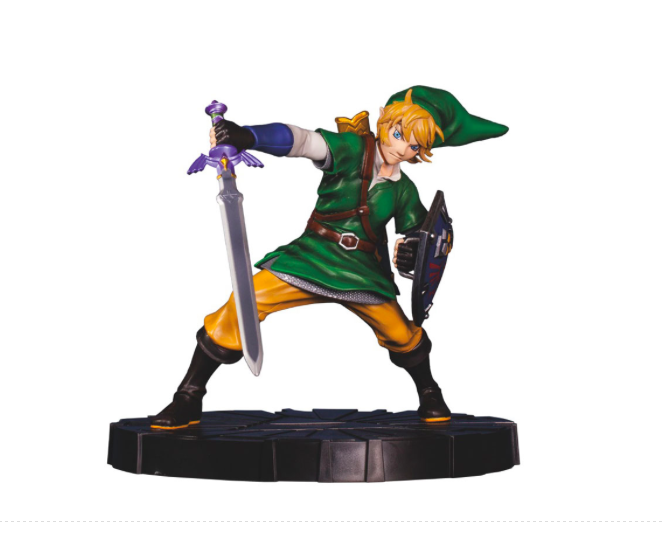 Although the Legend of Zelda is one of the most iconic and beloved video game franchises ever, historically we do not get a whole lot of Zelda toys and collectibles released. Dark Horse teased four statues in summer 2013, but only two of those statues were ever released. At least–until now: the long-delayed Zelda Skyward Sword Link and Scervo statues are finally up for order!

NYCC 2015 Dark Horse Zelda Skyward Sword StatuesIn July 2013, Dark Horse began showing off four Legend of Zelda statues: Link and Ganondorf from Twilight Princess, and Link and Pirate Captain Scervo from Skyward Sword. While Ganondorf and TP Link shipped out nearly two years ago, I had legitimately given up hope that SS Link and Scervo would ever be released.

But while on the floor reporting on New York Comic-Con 2015, I was shocked–and thrilled–to see the finished prototypes and release information for this long-lost pair of Nintendo statues! In 2016, the Dark Horse line of The Legend of Zelda statues will live once again!

Skyward Sword Link StatueI like the Twilight Princess Link statue Dark Horse released in 2013 quite a bit, but that version is very casually museum-posed just standing around.

2016 Legend of Zelda Skyward Sword Link Figure StatueThis Skyward Sword Link in dynamic, action-oriented pose looks and feels totally different from the previous Link statue, and is definitely a worthwhile purchase even for those who have the other Dark Horse Link.

Zelda Scervo Statue Dark Horse 2016Meanwhile, the Dark Horse Scervo statue is easily the most detailed and intricately sculpted of the quartet of Zelda Dark Horse statues! Scervo stands over 10″ tall and is posed ready for battle. Link is in for a real fight with the robot pirate captain!

Scervo will have a hefty retail price of $124.99, but thankfully, there’s also an early adopter pre-order discount on him. ::Phew::

Zelda Skyward Sword Scervo StatueI suspect that this is the best–and likely only–high-end Scervo figure that will ever be released, so if you’re a fan of the robot pirate captain, you do not want to miss this statue!

Link Statue from Legend of Zelda Skyward SwordThe Skyward Sword Zelda Link and Scervo statues are now up for order at discounted pre-order prices, and are scheduled to be released in January 2016. Scervo is a full $25 off for pre-orders, while Link is $15 off. These are expensive pieces even discounted, so I decided to pre-order now and save myself 40 bucks later!

What do you think of this long, long-awaited duo of Dark Horse Legend of Zelda statues, Nintendo fans? Is there a place for these beauties in your collection, or are pricey, high-end video game statues not for you?